For more information on our response to the on-going COVID-19 outbreak and to read about our Isolation Blanket project, please click here. 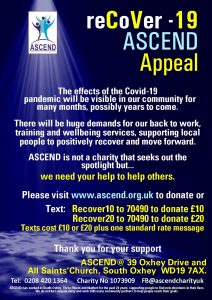 ASCEND today launched its “reCoVer 19” appeal, in order to raise funds to support the increasing demand for our services due to the Covid-19 pandemic.  ASCEND has been working within South Oxhey, Watford, Three Rivers and adjoining areas for nearly 24 years, supporting those furthest from the employment market to move forward in their lives.   As the UK comes out of lock-down, ASCEND is preparing for a big demand in its back to work, training and well-being services.   Commenting on the appeal, CEO Christine Wyard said, “ASCEND has a policy of never turning anyone away.   If for some reason, we cannot directly help, or a client needs multiple areas of support, we have a wide partnership network of organisations that we can refer to, some of which are based at our Step Up well-being hub.  Our appeal is all about supporting community members when they most need it and we very much hope that people will consider a donation, either via text or our website, so we can help as many members of the community as we can in these difficult times.”